Romeo and Juliet is a brilliant piece of literature and every time I think of it, I remember Juliet arguing “What’s in a name . That which we call a rose. By any other name will smell as sweet” . What Juliet did not say was that when it comes to those of us with very long names – the answer is EVERYTHING ! 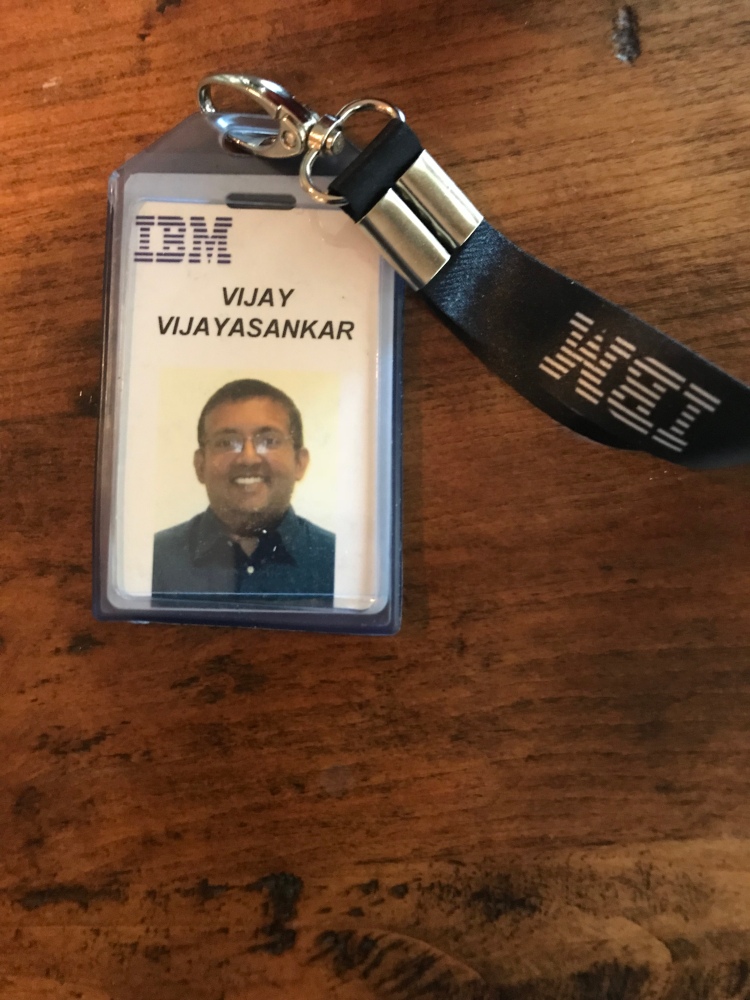 Last name was not a big deal at all when I was growing up in Trivandrum . Till I got out of college – I did not even have a real last name . It was just an initial V that I used – and that was common practice . My name was signed Vijayasankar . V . That V stood for Vijayaraghavan – which is my dad’s first name . There were no other Vijayasankars in any of my classes – and this never was a problem . My friends called me Sankar in school and VS in college . No one called me Vijay – ever !

My parents and grand parents had decided on my name after a lot of careful consideration . It’s a combination of the names of my paternal and maternal grandmothers. And it was – and still is – kind of a unique name . Normally it would have read Vijayashankar like it’s pronounced in Malayalam – but because of this truncation and concatenation of grad mothers’ names, and in the interest of not ending up with 13 alphabets in my name , it ended up being Vijayasankar . I have my paternal grandfather to thank for that part 🙂

Then I had to apply for my passport while I was in business school . That was the turning point. The dude at the counter insisted that initials are no good on a passport and that I should expand it to Vijayaraghavan. I was in a hurry and I agreed . What he did in the actual passport was that he made that my first name and my own name became my last name . For good measure he also had me convinced that this is how it was done for EVERYONE:)

The dude was not a total liar , as it turns out . I now know several Indian men whose names were butchered by the passport office . Several from Kerala have their dad’s first name as their first name in their passport 🙂

When I started in TCS – most of my fellow trainees were from the North (North of Kerala at least if not North of India ). They were the ones who started calling me Vijay instead of Sankar. It stuck and in a few months I started introducing myself as Vijay too 🙂

Finally came the time when I had to travel to USA. I remember the frustration of the CBP officer at JFK who let me in – she couldn’t make out which was my first name and which was my last name . Passports were not machine readable at that point . I nearly thought she won’t let me into the country 🙂

The next shock came in Starbucks in Denver, CO . My manager there told the barrista that my name was John – which always resulted in a big frown on her face ! I eventually started using VJ as my “Starbucks name”. I hadn’t known most of my life that everyone needs a Starbucks name 🙂

Along came an opportunity to live and work in Liverpool, UK . There – no one had any difficulty pronouncing my name . And there was excellent Indian food available all around. Yet I was in for my next “name experience”. We were building an extension to SAP for insurance and they needed a field to hold email address . My tech lead chose mine as the test case proclaiming “in the history of mankind , there hasn’t been a longer email id and there never will be” ! He was right of course and I have personally used it as the litmus test for a dozen projects after that 🙂

After the UK , I started in Los Angeles, CA on my next job . With that came the Spanish variable of my name problem . We had a lot of Hispanics in the team and they would call me VIHAYA ! Some would call me VIHAYA VIHAYA shortening my first and last names . Took me ages to find out that’s how they pronounce J

Finally there is the TSA . I swear I speak to them the most outside my own family given the amount of flying I do. Every week , they stare at the long string of letters on my ID at the airport for a couple of minutes . I am convinced they don’t read – they just count letters and verify it they way . Some tell me in an exasperated voice “it’s a very long name , sir”.

I respond “I blame the passport officer in Trivandrum”, and walk away enjoying their confused look 🙂

PS : hardly a week goes by without someone asking me about my looooong name . I wrote the whole story down so that the next person asking will just get a short link to it 🙂